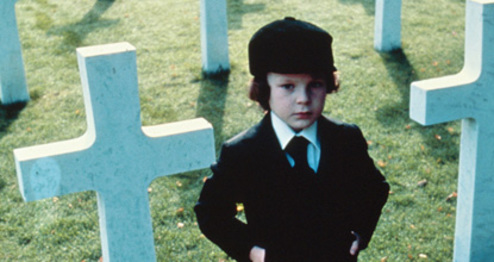 Robert Thorn, an American diplomat living in Rome, learns that his infant son died moments after birth. Rather than tell his wife Katherine the truth, which he fears would shatter her emotionally, Robert secretly arranges the adoption of another baby through the Catholic church. Years pass and the Thorn's child, Damien, has a happy, normal childhood. Robert is named Ambassador to the Court of Saint James, and the family relocates to a lavish estate in the English countryside. But their seemingly idyllic life begins to change when, during Damien's fifth birthday, the boy's nanny suddenly commits suicide.

Shortly thereafter, Robert is approached by Father Brennan, who claims he was present at the hospital when Damien's adoption took place. He is convinced that the boy is the son of the Devil, and that only a man named Bugenhagen, who lives in Israel, has the power to kill him. Robert initially believes the priest to be mad, but his faith begins to waiver as everyone around Damien is subjected to a series of freak, horrific incidents.